In Friday Night Drama, US Attorney Geoffrey Berman Refuses To ‘Step Down’ After Barr Asks For Resignation

END_OF_DOCUMENT_TOKEN_TO_BE_REPLACED 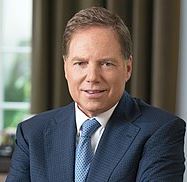 Geoffrey Steven Berman  is an American lawyer serving as the United States Attorney for the Southern District of New York since 2018. He previously served as an Assistant United States Attorney for the Southern District of New York from 1990 to 1994. In January 2018, U.S. Attorney General Jeff Sessions announced Berman’s appointment as interim U.S. Attorney for a statutory period of 120 days. On April 25, 2018, the judges of the Southern District of New York, pursuant to the statute, unanimously appointed Berman U.S. Attorney for an indeterminate term that expires upon the appointment of a Presidential nominee approved by the Senate. Berman earned a Bachelor of Arts in Political Science and a Bachelor of Science in Economics at the University of Pennsylvania in 1981. He then studied law at Stanford University where he obtained a Juris Doctor degree in 1984. During his studies, he was the Note Editor of the Stanford Law Review.