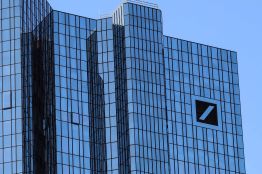 A federal jury in September convicted James Vorley and Cedric Chanu of wire fraud after a two-week trial over their trading of gold and silver on futures exchanges operated by CME Group Inc. Prosecutors alleged the pair engaged in spoofing, a type of rapid-fire market manipulation that traders and regulators say was once rampant in futures markets. END_OF_DOCUMENT_TOKEN_TO_BE_REPLACED

Deutsche Bank AG agreed to pay more than $130 million to settle criminal and civil charges that it bribed foreign officials and manipulated the market for precious-metals futures through a trading tactic known as spoofing. The Frankfurt-based bank agreed to a deal in which it won’t be prosecuted as long as it doesn’t engage in the practices again for more than three years, and wasn’t required to spoofing. Big banks have been rushing to conclude legal deals before the change of U.S. administrations, partly out of concern that there may be stiffer fines under a Democratic president. Three top U.S.-based banks agreed to pay more than $4 billion in settlements announced just before the November election, on issues ranging from bribery to market manipulation. END_OF_DOCUMENT_TOKEN_TO_BE_REPLACED

Under the terms of a deferred prosecution agreement with the DOJ, the German bank will pay criminal penalties of $79.5 million for Foreign Corrupt Practices Act violations involving bribes to consultants in Saudi Arabia, Abu Dhabi and Italy in an effort to secure business there. END_OF_DOCUMENT_TOKEN_TO_BE_REPLACED

“Today’s jury verdict shows that those who seek to manipulate our public financial markets through fraud will be held accountable by juries and the department,” said Acting Assistant Attorney General Brian C. Rabbitt of the Justice Department’s Criminal Division in a press release. END_OF_DOCUMENT_TOKEN_TO_BE_REPLACED

Prosecutors behind a sweeping US crackdown on market “spoofing” scored a big win on Friday when former Deutsche Bank traders Cedric Chanu and James Vorley were convicted of fraud for manipulating gold and silver prices.

A federal jury in Chicago, after three days of deliberations, concluded Mr Chanu and Mr Vorley made bogus trade orders between 2008 and 2013 to illegally influence precious metals prices. The week-long trial was the latest US prosecution of a “spoofing” case since the global market “flash crash” in 2010. END_OF_DOCUMENT_TOKEN_TO_BE_REPLACED

A federal jury in Chicago, after three days of deliberations, concluded Chanu and Vorley made bogus trade orders between 2008 and 2013 to illegally influence precious-metals prices. The weeklong trial was the latest U.S. prosecution of a “spoofing” case since the global market “flash crash” in 2010. END_OF_DOCUMENT_TOKEN_TO_BE_REPLACED

The criminal case against two former Deutsche Bank AG employees accused of fraudulent and manipulative precious-metals trading can proceed, after a federal judge on Monday rejected their request for dismissal.

The Government’s New Strategy to Crack Down on ‘Spoofing’

The Justice Department has tried to crack down on traders who try to move markets by entering and quickly canceling orders, conduct that goes by the catchy moniker “spoofing.”

But the government’s early prosecution of the crime has faced a big setback. In just the second trial for spoofing, which the Dodd-Frank Act outlawed, a Connecticut jury acquitted a former trader at UBS of spoofing this spring. That raised questions about whether prosecutors can pursue these cases.

James Vorley, 38, of the U.K., and Cedric Chanu, 39, of France and the United Arab Emirates, were indicted Tuesday for conspiracy and wire fraud by a grand jury in Chicago.

The two men are accused of engaging in a multiyear scheme to defraud other traders on the Commodity Exchange Inc., a venue run by the Chicago Mercantile Exchange Group. Prosecutors said they worked with another Deutsche Bank trader, David Liew, to place fraudulent orders that they didn’t intend to execute to create a false sense of supply and demand and induce other traders to enter into transactions they wouldn’t have otherwise made.