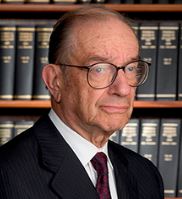 Alan Greenspan served five terms as chairman of the Board of Governors of the Federal Reserve System. His last term ended on January 31, 2006. He was appointed chairman by four different presidents. From 1954 to 1974 and from 1977 to 1987, Greenspan was chairman and president of Townsend-Greenspan & Co., Inc. From 1974 to 1977, he served as chairman of the President’s Council of Economic Advisers under President Gerald Ford, and from 1981 to 1983, as chairman of the National Commission on Social Security Reform. In addition, he served as a member of President Ronald Reagan’s Economic Policy Advisory Board and was a consultant to the Congressional Budget Office. After leaving the Board of Governors, Greenspan began his own Washington DC-based consulting firm, Greenspan Associates, LLC.  Over the years, Greenspan also held many roles in the public and private sectors. In addition, he served as a corporate director for a number of firms, including Aluminum Company of America (Alcoa); Automatic Data Processing, Inc.; Capital Cities/ABC, Inc.; General Foods, Inc.; J.P. Morgan & Co., Inc.; Morgan Guaranty Trust Company of New York; Mobil Corporation; and The Pittston Company. He received his bachelor’s (summa cum laude), master’s, and doctoral degrees in economics, all from New York University.

One of the first things any new chairman of the Securities and Exchange Commission does after getting the job is to clear his throat, put on his best “I mean business” scowl, and announce to the world just how tough he intends to be on the miscreants of Wall Street.

Normally, this harmless ritual lets the man taking on Washington’s most thankless job preen a bit in public before getting smacked to the canvas by a system that basically doesn’t want him to be tough at all.

But these are not normal times — and the one thing this country needs more than anything is a government that knows what it is doing and that deserves to be taken seriously by its citizens.