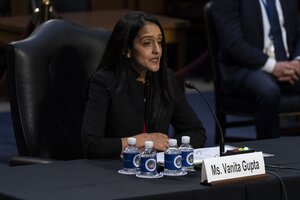 Gupta, weeks into a job at the NAACP Legal Defense Fund in New York, sensed something was amiss. She flew down to Texas, where families shared the humiliation of seeing loved ones marched through the streets handcuffed and half-clothed, with a local newspaper later declaring, “Tulia’s Streets Cleared of Garbage.” Documents in the Swisher County courthouse told a remarkable story as well. Gupta, then 26, stuffed a suitcase full of copies and flew back to New York to pitch her bosses. END_OF_DOCUMENT_TOKEN_TO_BE_REPLACED

The decision prompted an outburst of cheers from the dozens of victims present. But it was the only joyful moment of a proceeding marked by anguished testimonials from victims, calls for justice from prosecutors, and pleas for mercy by Madoff’s defense team, which had asked for 12 years. END_OF_DOCUMENT_TOKEN_TO_BE_REPLACED

Paxton, a Republican who is leading a separate antitrust blitz against tech titans, also demanded information from Facebook and Twitter, saying the “seemingly coordinated deplatforming” of President Donald Trump and others raises First Amendment and competition concerns. END_OF_DOCUMENT_TOKEN_TO_BE_REPLACED

Under the terms of a deferred prosecution agreement with the DOJ, the German bank will pay criminal penalties of $79.5 million for Foreign Corrupt Practices Act violations involving bribes to consultants in Saudi Arabia, Abu Dhabi and Italy in an effort to secure business there. END_OF_DOCUMENT_TOKEN_TO_BE_REPLACED