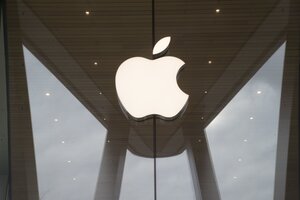 A Texas federal judge ruled Wednesday that Apple is entitled to a new damages trial after a jury found in August that it infringed PanOptis’ standard-essential 4G wireless patents and must pay $506 million, saying there is “serious doubt” about the reliability of the verdict.

U.S. District Judge Rodney Gilstrap declined to order a new trial on any other issues that Apple raised. As for the damages, he said that because the dispute centers on standard-essential patents, or SEPs, they must be licensed on terms that are fair, reasonable and nondiscriminatory, or FRAND, but the parties decided to leave the FRAND issues to a bench trial after the jury trial. END_OF_DOCUMENT_TOKEN_TO_BE_REPLACED

A New York appeals court has reversed a ruling that Carlyle Group affiliates can’t tap into excess insurance to cover part of $396 million in losses when a Moroccan oil refinery was seized, finding factual disputes remain about whether the policy’s coverage for theft was triggered.

Paul Simpson: Depository Trust & Clearing Corporation (DTCC) member of the board. He is the Global Banking & Markets Operations and Regions executive at Bank of America. He leads a team responsible for operations for institutional and commercial, corporate, investment banking and government clients, as well as small business and business banking clients. The team delivers end-to-end services, support and operations for sales, trading and underwriting businesses and comprehensive financial services solutions, including credit, depository, treasury and trade delivery and support. Simpson also leads the regional technology and operations teams in the Asia Pacific, Europe, Middle East & Africa and Latin America regions. Simpson is also responsible for robotics, and robotics process automation optimization across Global Technology and Operations.

END_OF_DOCUMENT_TOKEN_TO_BE_REPLACED

What Is Naked Short Selling?

When a seller “naked short sells a stock” they do not own the shares they are selling and therefore are selling artificial shares. This is like counterfeiting a stock. This process creates an obvious unfair advantage to the seller and an imbalance in the market as the sell side is now increased with more shares – many of which are counterfeit. There is a time limit on how long the seller can sell these shares and be naked on the trade and the time limit is 3 days. This is where the RegSho rules come in and the data we track. If the sellers broker-dealer has not located a borrow to cover this short trade within 3 days they will need to purchase back the shares they have sold on the open market. This process is referred to as a “Buy In”.

“When it comes to illicit short selling, the shorts win over 90% of the time”

END_OF_DOCUMENT_TOKEN_TO_BE_REPLACED

Regulation SHO is a start, but in order to guarantee a fair market place, the SEC must close the loopholes in Regulation SHO and institute comprehensive reforms to the clearing and settlement system. Until the SEC makes these necessary reforms and addresses the DTCC’s mismanagement of the Stock Borrow Program, investors will continue to be exposed to the manipulative potential of naked short selling.

Data released to Patch earlier this month had shown trade fails of 10 million shares starting in mid-April, a time when 4 million shares of Global Links were issued and outstanding.

The Naked Truth on Illegal Shorting

The Motley Fool cited  by RGM Communications via Wayback, 24 March 2005

It’s amazing how the word “naked” can liven up a discussion. Take naked short selling, for instance. The addition of this saucy little word turns the mundane act of borrowing and selling shares of stock in hopes of buying them back later at a lower price into a raging controversy fraught with conspiracy, secret identities, public recriminations, foreign intrigue, sports team owners, and now some of the top regulators in the land.

How can one word cause so much trouble? While legal short sellers must borrow the shares they sell, naked short sellers sell shares of stock they haven’t borrowed, have no intention of borrowing, and that may not even exist. Not surprisingly, this activity is illegal and has been since the Securities and Exchange Act of 1934. But for a number of reasons, regulators have overlooked it in the past.