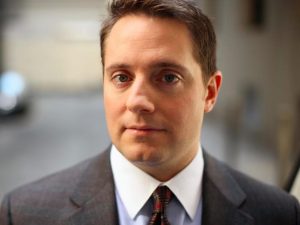 Carson Block  (Block grew up in Summit, New Jersey, and holds a law degree from Chicago-Kent College of Law.

Mr Block went to work with his father, a period he describes as “very embittering” as he was “lied to by a parade of management” of internet companies. He quit equity analysis for law school, later moving to Shanghai before leaving law and setting up the self-storage business in 2007. END_OF_DOCUMENT_TOKEN_TO_BE_REPLACED

END_OF_DOCUMENT_TOKEN_TO_BE_REPLACED

Carson Block, the activist short-seller famous for targeting Chinese frauds, recognizes familiar behavior in the rally of shares such as GameStop Corp. To him, the parabolic moves look less like the product of Reddit-driven retail orders than a short squeeze by hedge funds targeting other hedge funds.

END_OF_DOCUMENT_TOKEN_TO_BE_REPLACED

John Fichthorn had been in the hedge fund business for more than 20 years when a half-hour phone call with a stranger put him on high alert. In December 2017, Fichthorn — a veteran short-seller and the founder of hedge fund Dialectic Capital Management — had joined the board of a troubled small-cap company called Health Insurance Innovations. But when he happened to mention its name to a prospective investor a year later, the man told him an alarming detail. END_OF_DOCUMENT_TOKEN_TO_BE_REPLACED

Litigation funder Burford Capital has conceded defeat in an unprecedented battle with the London Stock Exchange (LSE) after the High Court rejected its application for the LSE to hand over confidential trading information.

Burford was seeking the identities of market participants trading in its shares in a bid to prove that its share price had been illegally manipulated during a sell-off that occurred after a heavily critical research report by hedge fund Muddy Waters last August.

TORONTO (Reuters) – Canada’s biggest life insurer is under pressure from shareholders to explain why it failed to disclose details of an ongoing court case which came to light after a short-seller released a report detailing the litigation. The stock has dropped 11.5 percent since Muddy Waters Capital LLC said last week that it had taken a short position, compared with a 4.7 percent decline in the stocks in Canada’s financial sector. Muddy Waters cited a court case pending in the Canadian province of Saskatchewan it believes could damage Manulife’s financials. The case against Manulife was filed on Nov. 23, 2016 by Mosten Investment LP, managed by Ontario businessman Michael Hawkins, documents submitted to the court show.
END_OF_DOCUMENT_TOKEN_TO_BE_REPLACED

Manulife Financial Corp. rejected a short seller’s statements that the company could lose billions of dollars if it loses a lawsuit concerning a universal life policy issued in the 1990s. Hedge fund Mosten Investment LP sued Manulife, claiming that it should be able to deposit as much capital as it can with the Canadian insurer and reap at least 4% in annual interest due to an insurance contract signed in 1997, Bloomberg News reported.

Muddy Waters Capital LLC disclosed a short position in Manulife and said in a report that the insurer is facing billions in losses, Bloomberg reported. Muddy Waters founder Carson Block expects a verdict in 2018. Holders of the policies were allowed to invest in side accounts with guaranteed rates of up to 4%, according to Canada’s Financial Post. The policies were issued at a time of high interest rates and could be profitable for firms amid a low rate environment.
END_OF_DOCUMENT_TOKEN_TO_BE_REPLACED

Early on the morning of May 31, San Francisco-based short-selling firm Muddy Waters LLC, best known in this country for the short report that toppled stock market darling Sino-Forest Corp. in 2011, posted a tantalizing message on the firm’s Twitter account.

“Good morning, Canada! MW is about to release a new short that we think is on its way to Zero,” the tweet read. END_OF_DOCUMENT_TOKEN_TO_BE_REPLACED