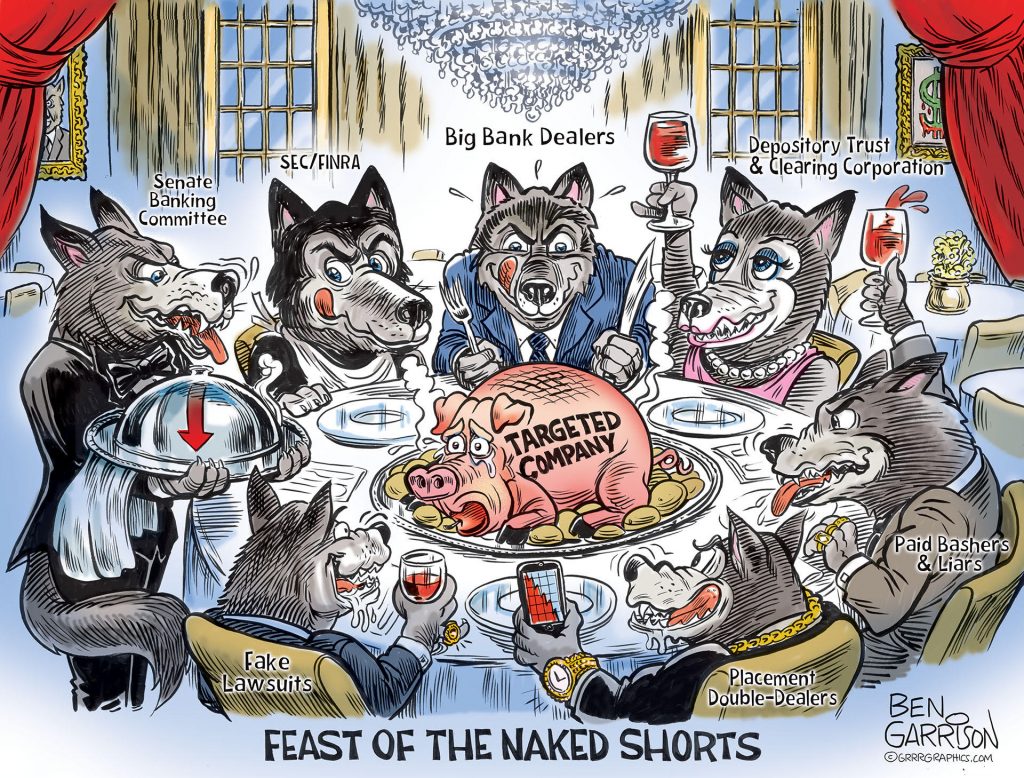 Mr. Robert David Steele and I were recently introduced by mutual acquaintances. All of us share one major conviction. We believe that hedge funds working in collusion with certain elite Wall Street investment banks are engaged in a long running, unbelievably broad, criminal enterprise to manipulate stocks. (I have labeled the participants as the wolfpack.) This scam defrauds investors of hundreds (yes hundreds) of billions of dollars each year and causes incalculable damage to companies, particularly the emerging companies that are most vulnerable to their stock manipulation. Integral to their strategy is the use of illegal naked shorting to create and sell huge amounts of counterfeit stock to depress stock prices. This is a crime against society as it is these entrepreneurial companies that most often lead technological evidences that drive the American economy.

The wolfpack is driven by insatiable greed. It is not enough to have a home in Greenwich, a summer home in the Hamptons, a condo in Miami, an apartment in New York City, a ski chalet in Aspen, private planes, cars, ad infinitum. They just want to make their next billion dollars and if it means destroying a small company trying to develop a vaccine for brain cancers, this is just business as usual. Most recently, I have watched with consternation attacks on Gilead which is developing a therapeutic for Covid-19 (remdesivir) and Moderna which is developing a vaccine for Covid-19. The wolfpack was successful in driving down the stock prices of Gilead and Moderna as well as the market as a whole using bloggers to spread negative fake news and then pounding the stocks with shorts. These were nice scores for the wolfpack. This sounds like wild hyperbole, but sadly I do not believe that I am overstating the case and if you decide to look further, I think you will agree.

Mr. Steele originally asked me to do an interview with him. In preparation, I prepared an outline. After looking at it, he suggested it might be more effective to publish the outline. This work is just a perfunctory overview of the research that I have done on stock manipulation. It is meant to give you an overview and hopefully will whet your appetite to dig deeper. I want to reemphasize this outline is a simplistic description of a very complex scheme that Wall Street has perfected over 30 years. If you would like more information, I would urge you to go to a series of ten articles that I have published on my website, SmithOnStocks.com. Here is the link.

Wall Street, Not Investors, Owns Almost All of Stocks Traded in the US

Why DTCC and CEDE Were Created

Have I Gone Over the Top?

Article: Part 1 in a Series of Reports on Blatant, Widespread Stock Manipulation that is Enabled by Illegal, Naked Shorting

Article: Part 2 in Series on Illegal Naked Shorting’s Role in Stock Manipulation- Conventional Wisdom on How Short Sales are Executed

Article: Part 3 in Series on Illegal Naked Shorting’s Role in Stock Manipulation – Prime Brokers and the DTCC Have a Troubling Monopoly on Clearing and Settling Stock Trades

Article: Part 4 in Series on Illegal Naked Shorting’s Role in Stock Manipulation: Who are the Key Players?

Article: Part 8: Illegal Naked Shorting Series: Who or What is Cede and What Role Does Cede Play in the Trading of Stocks?