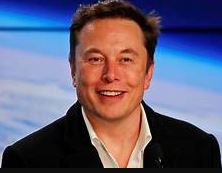 Elon Reeve Musk is a South African-born American entrepreneur and businessman who founded X.com in 1999 (which later became PayPal), SpaceX in 2002 and Tesla Motors in 2003. Musk became a multimillionaire in his late 20s when he sold his start-up company, Zip2, to a division of Compaq Computers.

Musk claims “short sellers are Tesla’s worst enemy” and admitted Tesla’s shares have been targeted for naked short selling. In a tweet, he says, “Bravo, right thing to do! Short selling should be illegal,” Musk tweeted early Tuesday in response to a Financial Times story about Japan’s Government Pension Investment Fund, the largest in the world, announcing it will no longer allow stock lending from its $390 billion foreign equities portfolio for short selling.

Book: Elon Musk: Tesla, SpaceX, and the Quest for a Fantastic Future

Elon Musk Mocks SEC, Calls for Short-Selling to Be Made Illegal