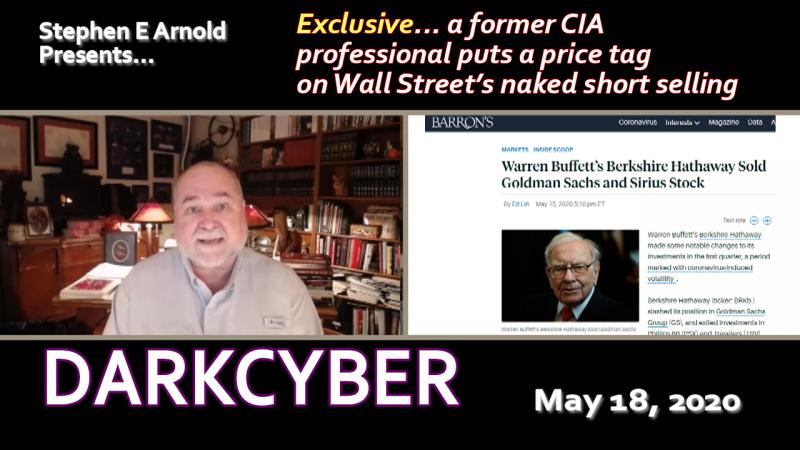 DarkCyber, a video news program, interviewed Robert David Steele, a former Central Intelligence Agency professional. Steele publishes books about intelligence strategy and procedures. In a conversation with DarkCyber’s Stephen E Arnold, Steele reported that a major lawsuit is about to be filed in New York City after a multi-year investigation into the practice of what financial specialists call “naked short selling.” The term of art means that an individual trades in financial assets without owning these assets or having access to the assets. The practice is a violation of US law.

In the interview, Steele said:

“The lawsuit will identify six major Wall Street firms that have engaged in financial activities which violate US laws. The dollar size of the questionable transactions are substantial – tens of trillions of dollars toward $100 trillion.

Steele’s investigation built upon research conducted by Dr. Susanne Trimbath. She published her data in her January 2020 book Naked, Short, and Greedy. Steele further asserted that the bulk of the information has been gathered by researchers supporting the lawsuit that will be filed by James Wesley Christian Esq., a partner at Christian, Smith & Jewel in Houston, Texas, in partnership with other New York-based law firms.

Steele revealed that a preliminary report has been delivered to the White House and the matter has been brought to the attention of President Donald J. Trump. Steele also announced in the interview that a new Web site focused on the topic of naked short selling is now open to the public: (www.stopnakedshortselling.org).

“DarkCyber” is a news program produced by Stephen E Arnold, author of CyberOSINT: Next Generation Information Access, Dark Web Notebook: A Handbook for Law Enforcement and Intelligence Professionals, and three books about Google’s technology published by Infonortics in the United Kingdom. Arnold also publishes Beyond Search, a blog about online information at www.arnoldit.com/wordpress.

This release was published on openPR.