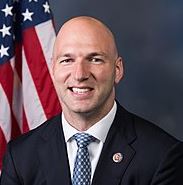 Anthony E. Gonzalez (R-OH) is a committee member of the 116th Congress U.S. House Committee on Financial Services. He is an American politician and former professional football player. A member of the Republican Party, he has been serving as the U.S. Representative for Ohio’s 16th congressional district since 2019. He played college football at Ohio State and was drafted by the Indianapolis Colts in the first round of the 2007 NFL Draft. He was elected to the U.S. House of Representatives on November 6, 2018 and was sworn in on January 3, 2019. He graduated from Ohio State University (BA), and Stanford University (MBA).