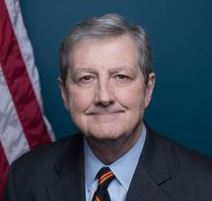 U. S. Senator John Kennedy (R-LA) is a minority member of the US Senate Committee on Banking. He was elected to the U.S. Senate in 2016. He also serves on the Appropriations, Budget, Judiciary and Small Business & Entrepreneurship committees. He serves as the chairman of the Senate Appropriations subcommittee Financial Services and General Government. Prior to his election to the Senate, Kennedy was state treasurer of Louisiana for five terms.  Sen. Kennedy served as secretary of the Department of Revenue, special counsel to Gov. Roemer and secretary of Gov. Roemer’s Cabinet. He was also an attorney and partner in the Baton Rouge and New Orleans law firm of Chaffe McCall.