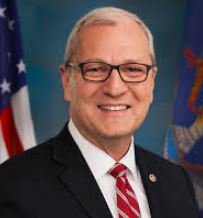 U.S. Senator Kevin Cramer (R-ND) is a minority member of the US Senate Committee on Banking.  He was elected to the United States Senate on November 6, 2018 after serving three terms as North Dakota’s At-Large Member of the United States House of Representatives.  He  also serves on the Armed Services, Environment and Public Works, Veterans Affairs. Cramer has a Bachelor of Arts degree from Concordia College in Moorhead, Minnesota, a Master’s degree in Management from the University of Mary in Bismarck, North Dakota, and was conferred the degree of Doctor of Leadership, honoris causa, by the University of Mary on May 4, 2013.