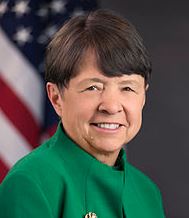 Mary Jo White is an American attorney who served as the 31st Chair of the Securities and Exchange Commission (SEC) from 2013 to 2017. She was  the United States Attorney for the Southern District of New York, serving from 1993 to 2002. On January 24, 2013, President Barack Obama nominated White to replace Elisse B. Walter as Chair of the U.S. Securities and Exchange Commission. She was confirmed by the Senate on April 8, 2013 and was sworn into office on April 10, 2013. On November 14, 2016, White announced she would step down from her SEC position at the end of the president’s term and is now the Senior Chair at Debevoise & Plimpton. She received a bachelor of arts from the College of William & Mary in 1970. She earned an master of arts in psychology in 1971 from The New School for Social Research and a Juris Doctor degree from Columbia Law School in 1974.