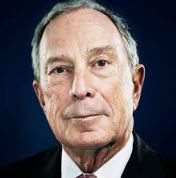 Michael R. Bloomberg is an American businessman, politician, philanthropist, and author. He is the majority owner and co-founder of Bloomberg L.P.. He was the 108th mayor of New York City from 2002 to 2013. Bloomberg grew up in Medford, Massachusetts and graduated from Johns Hopkins University and Harvard Business School. He began his career at the securities brokerage Salomon Brothers before forming his own company in 1981. That company, Bloomberg L.P., is a financial information, software and media firm that is known for its Bloomberg Terminal. Bloomberg spent the next twenty years as its chairman and CEO.