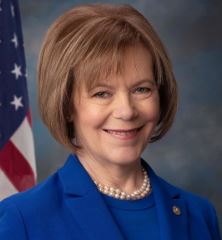 U.S. Senator Tina Smith (D-MN) is a minority member of the US Senate Committee on Banking. She serves as United States Senator for Minnesota. She graduated from Stanford University and in 1984, earned an MBA from the Tuck School of Business at Dartmouth College. She’s served as Chief of Staff to both Minneapolis Mayor R.T. Rybak and Governor Mark Dayton. In 2014, Tina was elected to serve as Minnesota’s 48th Lieutenant Governor. Other Committee Assignments include: The Senate Committee on Health, Education, Labor, and Pensions, the Committee on Agriculture, Nutrition and Forestry, and the Senate Committee on Indian Affairs.