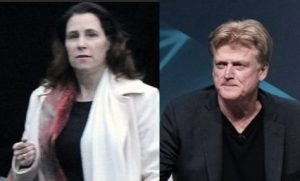 He analyzed tons of data.

He told everyone that the voting data didn’t make sense.

Patrick Byrne, the former CEO of Overstock.com, went on with Christopher McDonald of “The McFiles” to discuss the “drop and roll” strategy Democrats used to steal the 2020 election from President Donald Trump.

President Trump set all new records for a sitting US president in a presidential election. President Trump’s coattails were deep and wide, winning at least 14 GOP seats in the US House, holding the senate and picking up seats in several state legislative bodies.

Unlike in 2016, today just months after the election we are not allowed to question the “results” or irregularities.

The Deep State and its media allies won’t let us.

And guess who is running the SEC?  Mrs Peter Strzok!

The U.S. Securities and Exchange Commission (SEC) announced in January that Melissa Hodgman, the wife of disgraced former FBI agent Peter Strzok, was appointed to head the agency’s Division of Enforcement as its acting director.

Overstock.com Inc said on Friday it received a subpoena from the U.S. Securities and Exchange Commission in January, seeking information on the company’s 2019 forecast for retail unit and on certain communication with executives and investors.

The online retailer and blockchain tech investor is cooperating with the investigation, it said in a regulatory filing, and continues to provide documents requested in the subpoena.

Patrick Byrne was CEO of Overstock.com until August 2019.

That means he’s likely the focus of investigators.