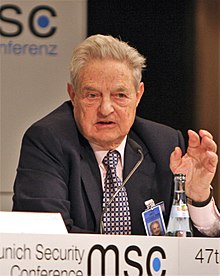 Born in Budapest, Soros survived the German occupation of Hungary and moved to the United Kingdom in 1947. He studied at the London School of Economics and was awarded a bachelor’s, then obtaining a master’s, and eventually a Doctor of Philosophy (Ph.D.) from University of London.

Soros began his business career by taking various jobs at merchant banks in the United Kingdom and then the United States, before starting his first hedge fund, Double Eagle, in 1969. Profits from his first fund furnished the seed money to start Soros Fund Management, his second hedge fund, in 1970. Double Eagle was renamed to Quantum Fund and was the principal firm Soros advised. At its founding, Quantum Fund had $12 million in assets under management, and as of 2011 it had $25 billion, the majority of Soros’s overall net worth.