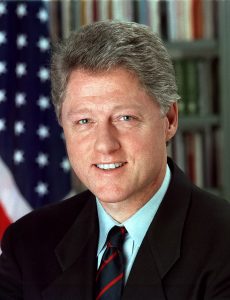 William Jefferson Clinton (né Blythe III; born August 19, 1946) is an American lawyer and politician who served as the 42nd president of the United States from 1993 to 2001. Prior to his presidency, he served as governor of Arkansas (1979–1981 and 1983–1992) and as attorney general of Arkansas (1977–1979). A member of the Democratic Party, Clinton was known as a New Democrat, and many of his policies reflected a centrist “Third Way” political philosophy. He is the husband of former secretary of state, former U.S. senator, and two-time candidate for president Hillary Clinton.