AMC Stock: The Big Screen News That Has AMC Theaters Gaining Once Again 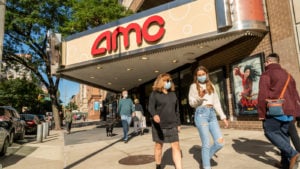 The last month has been pretty rough on AMC Entertainment (NYSE:AMC). The theater chain erased a great deal of its gains over the last few weeks, thanks to slowing momentum in the world of meme stocks. Investors in this highly volatile investing sect have seemingly turned their attention away from large plays like AMC and sent prices tumbling. But now, the company is closing a deal that can bring it some crucial revenue over the next few years; two theaters in the Los Angeles area will become AMC theaters, with the chain signing a years-long lease on the locations. As a result, AMC stock is gaining once again.

Investors are jumping for joy with some long-awaited good news. AMC is inking a long-term lease to operate two historically high-grossing theaters in the Los Angeles area; the company is revealing the locations to be the theater at the Grove shopping complex and another at Americana at Brand. These theaters are the second-highest grossing and fifth-highest grossing cinemas in the LA metro area, respectively. Of course, in the movie capital of the world, as well as a metro area of nearly 19 million people, AMC can expect these locations to pull plenty of revenue. Previously, the theaters were both operated by Pacific Theatres.