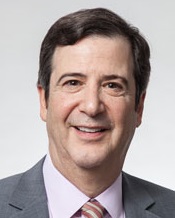 Robert J. Shapiro (born 1953) is the cofounder and chairman of Sonecon, LLC, a United States private consultancy for economic and security-related issues that has built a reputation on a range of policy matters, including climate change, intellectual property, securities fraud, healthcare reform, demographics, the resilience of the electric grid to cyberattacks, and blockchain technologies.

Beyond Dr. Shapiro’s responsibilities and leadership at Sonecon, he is also currently a Senior Fellow of the McDonough School of Business at Georgetown University, a board member of the Medici Venture Fund, and a member of the advisory boards of Gilead Sciences and Cote Capital.

Previously he was undersecretary of commerce for economic affairs in the administration of President Bill Clinton, principal economic adviser to Bill Clinton during the 1992 campaign, a senior economic adviser to Hillary Clinton, Barack Obama, John Kerry and Al Gore in their campaigns, a cofounder of the Progressive Policy Institute, legislative director to Senator Daniel Patrick Moynihan, and an associate editor of U.S. News & World Report.