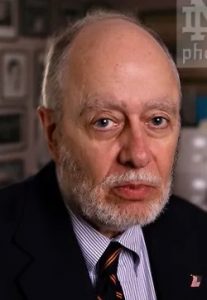 George Robert Blakey (born 1936) is an American attorney and law professor. He is best known for his work in connection with drafting the Racketeer Influenced and Corrupt Organizations Act and for scholarship on that subject.  Under the close supervision of Senator John Little McClellan, the Chairman of the Committee for which he worked, Blakey drafted the “RICO Act,” Title IX of the Organized Crime Control Act of 1970, signed into law by Richard M. Nixon.  After Robert F. Kennedy became Attorney General, the Department began a major effort to bring criminal prosecutions against organized crime members, corrupt political figures, and faithless union officials.

Blakey also drafted Title III on wiretapping of the Omnibus Crime Control and Safe Streets Act of 1968. He was Chief Counsel and Staff Director to the U.S. House Select Committee on Assassinations from 1977 to 1979, which investigated the assassinations of John F. Kennedy and Martin Luther King Jr. under the direction of Louis Stokes.

Book: Fatal Hour: The Assassination of JFK by Organized Crime