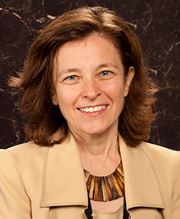 Sarah Bloom Raskin took office as a member of the Board of Governors on October 4, 2010, to fill an unexpired term ending January 31, 2016.  She resigned on March 13, 2014. Early in her career, she worked at the Federal Reserve Bank of New York and the Joint Economic Committee of the Congress. She was later managing director at the Promontory Financial Group. She also served as the banking counsel for the US Senate Committee on Banking, Housing, and Urban Affairs. Before her appointment to the Board of Governors, Raskin was the commissioner of financial regulation for the State of Maryland. Raskin received a bachelor’s degree in economics (magna cum laude) from Amherst College and earned a law degree from Harvard Law School.