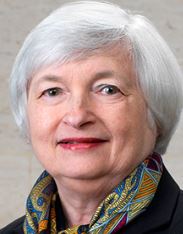 Janet L. Yellen took office as chair of the Board of Governors of the Federal Reserve System in February 2014, for a four-year term ending February 3, 2018. Yellen is professor emeritus at the University of California at Berkeley. She served as a member of the Board of Governors until February 1997 and then left the Board to become chair of the Council of Economic Advisers through August 1999. She also chaired the Economic Policy Committee of the Organization for Economic Cooperation and Development from 1997 to 1999. Yellen served as president and chief executive officer of the Federal Reserve Bank of San Francisco (2004–10) as well as vice chair of the Board of Governors (2010-14) before her appointment as chair. Yellen is a member of both the Council on Foreign Relations and the American Academy of Arts and Sciences. She has served as president of the Western Economic Association, vice president of the American Economic Association, and a fellow of the Yale Corporation. She graduated from Brown University with a degree in economics in 1967. She received her doctorate in economics from Yale University in 1971.