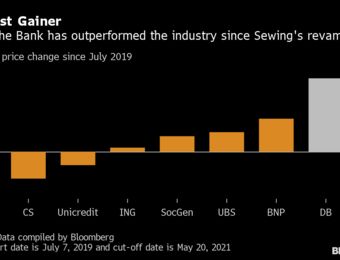 The Fed’s recent warning came in an annual regulatory assessment that said Deutsche Bank hadn’t improved its risk management practices despite being under confidential agreements with the central bank to fix the issues, the people said. The assessment letter has the German bank’s leaders bracing for potential sanctions, including the possibility of a large fine, said one person briefed on the matter.

The Fed’s latest admonishment is a setback for Chief Executive Officer Christian Sewing, who has been working diligently to repair Deutsche Bank’s relations with banking supervisors following a tumultuous period in which the lender stumbled from one crisis to the next. He now has a new hurdle to overcome — and it’s likely a big one.

Deutsche Bank spokesman Dylan Riddle said the firm doesn’t comment on any communications it has with regulators. A Fed spokesman also declined to comment.

Deutsche Bank has had multiple dust-ups with U.S. regulators — including foreign-exchange violations and ties to money-laundering cases. The lender has also been the subject of numerous Fed orders on how the company manages risks, and the firm’s efforts to overhaul its controls haven’t convinced the agency that the bank’s problems are behind it, the people said.